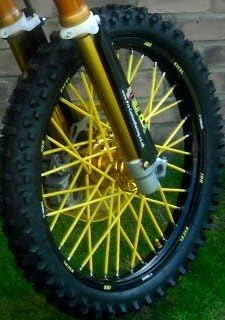 Spoke Wraps easily and quickly give your bikes spokes a clean custom look while covering up your old rusty ones. Spoke Wraps have a slit down one side for easy installation. They are made of tough durable plastic that is fuel and UV resistant. Spoke Wraps are cut, sliced and packaged at the factory for excellent fitment. Made in the U.S.A.